Are you fascinated by what goes on in the physical world? Are you curious about the inner workings of natural phenomena? For anyone like me who is fascinated by water, Nina Munteanu’s Water Is…:The Meaning of Water  offers wonderful analyses from minutia like the construction of a single drop to the way whirlpools and eddies form in the flow of a river and more macro issues like the relationship between the “stable chaos” of turbulence and quantum physics.

Water Is provides delightful explanations of things you thought you knew –

Though a practicing limnologist and water scientist, Munteanu considers herself “one of the mavericks of the scientific community,” attentive to what her colleagues term “weird water” – aspects of the way water behaves for which traditional science has not (yet) found formulas. The result is a trove of disparate treasures, like how Galileo understood water flow, the Chinese character for water,  Leonardo da Vinci’s water drawings, the Gaia Hypothesis, and David Bohm’s theory of flux 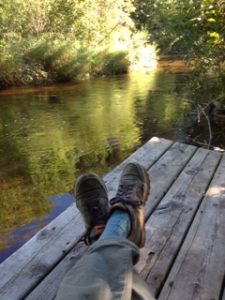 This is less a sit-down-all-in-sequence read than a quirkily diverse compendium of disparate wonders which I dipped in and out of, sitting on my cabin dock as the river babbled and eddied by me, all summer long.