In my recent blog about furry little Pitas  and their trouble coping with rising temperatures,  I wondered whether they might develop thinner coats in time to avoid extirpation.

( Extirpation is the loss of a species population in a particular habitat or, local extinction.  Extinction refers to the loss of the entire species on a world-wide basis)

Since I can be cheered up by even tiny bits of hope from nature  these days, I was pleased to hear that Snowshoe Hares are not only developing cooler winter coats but, in some warming areas, discarding them altogether.

Scientists, examining hares living in Pennsylvania, the Eastern United States, and the Yukon report  that  “In addition to finding greater numbers of the animals with thinner winter coats in the more southerly population, (they) found a small number of individuals which did not develop a full winter pelt…. Clearly adapting to present climate conditions.”   But,  they ask,  “can the hares change quickly enough to keep up with global warming?”

If so, can a similar flexibility impact the fate of other species?  One way to approach this puzzle is to take  previous periods of climate fluctuation into account. as does Lucas Isakowitz, citing Jonathan Rolland’s research on such periods.

“’You have to imagine that 40 million years ago, global temperatures were much higher, and there were tropical areas in the poles, even in Antarctica,’” said Rolland. “’As the Earth began to cool, some species evolved, while others just moved to warmer climates.’” Birds and mammals proved themselves to be better at evolving than their cold blooded counterparts, which explains why they were able to move into habitats in more northern and southern regions.”

The problem, concludes Isakowitz, is that the present global warming caused by human impact isn’t spread over millions of years,  but has  increased more and more rapidly during the last few centuries.

I  take heart, nonetheless, from  the adaptability of the Snowshoe Hare, and from those indefatigable House Finches that have not only spread far and wide over American in recent decades but have developed mutations for  new habitats.  When they decided to nest in cities, for example, their beaks changed shape to be more useful for cracking  bird feeder seeds, while urban finch males developed  new city songs that they realized were  appealing to newly urbanized females.

Then, too, there is the lowly and  Tardigrade:

“MICROSCOPIC BUG THAT’LL SURVIVE UNTIL THE SUN DIES DISCOVERED IN PARKING LOT IN JAPAN,” reads a header in my local newspaper, touting the Tardigrade as “The world’s most indestructible species, … an eight-legged micro-animal (that) will survive until the sun dies.” 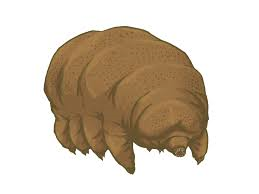 Dystopian novelists create worlds so deep in disaster that, by targeting the horrors, they nudge their readers to think about better solutions,  You wouldn’t think it, but the new Solarpunk genre is more (is this possible?) utopian. END_OF_DOCUMENT_TOKEN_TO_BE_REPLACED

Exploring the blogosphere last week, I found a forum sponsored by Science Fiction and Fantasy World  on a whole new genre – Cli-Fi. END_OF_DOCUMENT_TOKEN_TO_BE_REPLACED