I have always loved the fog, especially after bright hot August days in Maine when it rolled in from the Atlantic and the horn at Seguin began its plaintiff chant. Fog has often been a welcome  presence for me, soothing the bright edges of life that cut so sharply.

These days, I like to watch fog roll across Lake Michigan, or sit by the Betsie River as the mists dissolve. 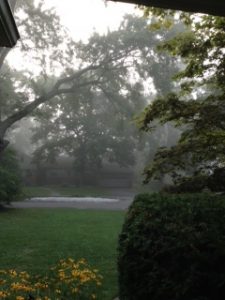 Even here at home,  foggy mornings  soothe my spirit.

Toward the end of the first volume in my Infinite Games series, my characters are entirely dependent upon the fog to escape  enslavement  and exploitation in the early industrial city of Brent:

“But where was the fog? The winter days remained relentlessly bright and sunny. Clare and Bess at the loom, the Fisher folk by their boats, the Marshlanders in their huts and the little spinners in the weaving house all prayed long and hard for the Gray Mother to come to their succor. But January wore on, and no help came.

Late one dark afternoon in early February, when the sun had already set, Rivelin was taking his turn at watch near the jetty. The two boats had been ready since midwinter: sails unfolded under the hatches, oarlocks wrapped in felt for silence. But the winter nights remained clear and moonlit, pricked with a thousand stars. Rivelin was watching for one of these stars because when it appeared he would be relieved for his dinner. It was Sirius, the Dog Star, and it emerged twinkling and blinking as it rose from the southern horizon but then, suddenly, disappeared. Rivelin became alert, sniffing in every direction. His sensitive nostrils picked up a damp, greenish smell. Out in the marshes of the bay, first one reed and then another acquired a wispy skirting. As the grey tendrils crept inland, one watcher after another passed along the signal that the time for escape had come.”