With  thanks  to  Cousin  Sarah  for  her  home  made  sausage  photo

“What’s needed now is research on tactics and strategies at the organizational and societal levels: moving beyond public opinion and messaging to get elbow-deep in how the proverbial sausage is made.” Sarah DeWeerdt, “Climate research needs a better understanding of power,” Jan 8, 2019 in Anthropocene Magazine

Every day, protesters from our local resistance movement shouted outside our Republican Congressman’s office, demanding he hold a town hall and deploring his cowardice for not doing so by brandishing rubber chickens.   If, as Deweert suggests, “What climate advocates need to know is how to build enduring relationships with political decision-makers,” was this the way to do it?

I didn’t think so, and that was why I was not among them. I had been visiting him for several years as a member of the Citizens’ Climate Lobby, promoting carbon fee and dividend policy. CCL’s long term goal is to develop the political will of both citizens’ and legislators to reduce global warming. Our strategy is for local chapters to cultivate their Members of Congress; our tactic to that end is civil conversation. Here’s how that goes:

1. We start our meeting with a statement of gratitude for an action he/she has taken.

2. We ask for his/her views on environmental issues and listen as he/she talks for items we hold in common.

3. We speak from those common interests, then provide information on carbon fee and dividend policy.

4. We have one “ask” per meeting. For example, “would you consider joining the Climate Solutions Caucus in the House of Representatives?

5. We offer ourselves as resources on environmental questions and provide a notebook of carefully organized background materials as we say our goodbyes.

By no means a moderate, our Congressman came out against Pipeline 5, which endangered Lakes Michigan and Huron; he signed a letter to President Trump asking him to urge Canada not to dump Nuclear Waste near Lake Huron; he joined the Climate Solutions Caucus in the House of Representatives and, to top it all off, co-sponsored  The Energy Innovation and Carbon Dividend Act   when it was introduced in the House of Representatives late in the 2018 session.

Did I mention that CCL is bipartisan? Our Congressman’s political will was undoubtedly influenced by a member of our group who had worked in his previous campaign. With local chapters conducting respectful visits with Members of Congress all over the country for a period of years, you can see how this tactic of civil discourse creates legislative results. That is how interest group politics works: think of the Sierra Club, for example, The National Organization for Women, The League of Conservation Voters, The NAACP and Martin Luther King’s Southern Christian Leadership Conference.

In “The Path of Greatest Resistance,” a review of two books on the Resistance Movement, David Cole worries that demonstrations and marches do not, in and of themselves, create movements. “The challenge is this,” assert researchers quoted by Deweerdt: “in most cases, the null assumption is that activism becomes power at scale: that collective action is merely the sum of its parts, and the more people who take action, the more likely a movement is to achieve its goals.”

Historically, political sausage is made by mass demonstrations as the end result and public face of long term planning. Take the case of the Civil Rights Movement: the Selma March, the Montgomery Bus Boycott, the March on Washington, and the Poor People’s Campaign were effective public outcomes built upon years of organization. The timely dissemination of strategically worded press releases, careful decisions about who was to speak on TV and word by word crafting of their statements were tactics in a long term strategy designed to create national support for the desired legislation.

“Whether #MeToo and other progressive movements will achieve lasting reform,” Cole asserts, “will depend on these organizations working collectively in multiple forums, including courtrooms, state legislatures, corporate boardrooms, union halls, and, most importantly, at the ballot box. We all need to turn away from our smartphones and screens and engage, together, in the work of democracy.”

Wait a minute! Contemporary political movements use smartphones and screens to sharpen their messaging and widen their base; tweeting and posting, messaging and emailing are powerful and effective tactics of long term organizational strategies.

Flash back to 1967 when I set up the first National Organization for Women Chapter in Atlanta, Georgia.  This involved telephone calls back and forth to Betty Friedan on our landline (a hard person to reach, which she made up for by calling us day and night), a telephone tree for letting members know about actions and meetings (extremely time consuming, as you couldn’t leave a voice message for fear you were talking to a  misogynistic family member), and tons of slow moving snail mail  to and from national headquarters.

Fast forward to 2019, when social media has exponentially strengthened political effectiveness.  In the case of CCL  the organization’s web site provides detailed instructions on such tactical items like how to set up a a meeting with your Member of Congress and what talking points to use.   I am in a group that alerts me by email when to respond to a newspaper article with a Letter to the Editor,  and also a Social Media unit which notifies me when a Tweetstorm needs to be raised or a Post needs a commented on and shared. Where in an earlier life I established newsletters for every NOW chapter I joined, now I administer the Facebook page for our local CCL.

Did I mention that The Energy Innovation and Carbon Dividend Act (H.R. 763) has been reintroduced in the 2019 session of the House of Representatives?

From my experiences as a long ago NOW organizer and a present day environmental activist, it seems clear  that the development of political will and the achievement of legislative success depends both on crowds waving rubber chickens and lobbyists making nice, on a strategic blend of rabble rousing and long-term planning.

And that is how the political sausage is made.

A Gerontologist was helping me register at the Gerontological Association Convention in Boston.

“Don’t you know,” she replied sternly, “age is just a number.”

I was there at my Gerontologist daughter’s invitation to disprove certain stereotypes about aging women by talking about my present life as an “aging generative activist.”

“Activity and agency are associated with youth and manhood,” states her panel abstract, “while their opposites – passivity and dependence – are linked with old age and womanhood.”

I told the audience that age has brought me a perspective on my lifetime activism, and gave them some advice on best practices for their own engagement in the public sphere – things like choosing only one cause at a time, not working alone but with a well-organized group focused on that cause, and utilizing their particular talents rather than trying to be something they are not.

In detailing my particular adaptations for continuing my activism into old age,  I pointed out that with more frailty  I tire easily and so march less and tweet more, posting and networking, blogging like mad and engaging in conference calls and on-line meetings.

Then I took a hard look at that pesky term “generativity,” urged upon the aging by authorities like Erik Erickson as a developmental stage when you ought to guide the next generation and act upon concern for people outside of yourself and your immediate family.

Enough of that already! Erikson is a man. Calling for a burst of old age generativity from a woman who has spent her whole life doing for others looks like same old same old to me. Instead, we retired women need to develop tons of self-compassion before we fill our schedules with activism,  a balance between time just for ourselves (self-generativity) and time spent contributing to our communities and our world. 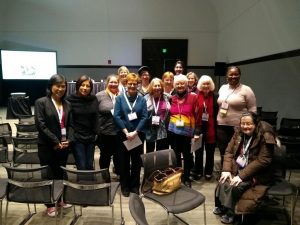 My daughter used consciousness raising groups for our question period. During the chit-chat before we started I heard one (very accomplished) older woman say to another, “But you don’t look 79!” Even here, apparently, the idea that an oldster acting (or looking) “younger” than the number that marks her age is admirable managed to creep into the conversation without any challenge. 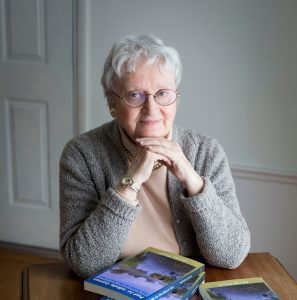 If you praise me by implying that I am acting youthful by being  active, aren’t you subtracting an essential element of my existence? I am old.  I am also deeply engaged in environmental activism. Both those facts define me.  Also, by some weird cognitive quirk that could reverse itself overnight, I am smarter than I have ever been before. Sometimes, reading an author I could never get my mind around when young or proofing an article that is so complicated I can’t believe I wrote it, I can feel the little neurons in my brain fizzing away merrily just like they did during my first cognitive surge at age 14.

These are realistic descriptors of the way I am now, integral parts of my authentic being. I am not somebody’s stereotypical idea about a number, but  I am  81.  I am not a societal construct but an aged activist woman immensely grateful to have made it whole into the present moment.

I have a cottage on the Betsie River in Northwest Michigan, with a dock upriver and swimming stairs further down.  END_OF_DOCUMENT_TOKEN_TO_BE_REPLACED