Henry David Thoreau felt that he would become “the laughing stock of the scientific community” if he tried to tell them what “branch of science” he pursued, because they would have no use for the philosophical (specifically, transcendental) basis of his observations. He was convinced that humans are not superior to the material world but endowed with the same spirit; his passion for nature had to do with the feeling of wholeness it instilled in him as a participant in rather than an outside observer of natural phenomena:

“I keep out of doors for the sake of the mineral, vegetable, and animal in me,” he wrote on November 4, 1852. “My thought is a part of the meaning of the world, and hence I use a part of the world as a symbol to express my thought.” (The Journal of Henry David Thoreau, 1836-1861 The New York Review Books and Classics).

His refusal to hold himself apart from nature did not prevent Thoreau from using the scientific method in his observations, taking detailed notes on natural objects and devising experiments to understand them better in order to arrive at viable hypotheses. That is what he and some  friends were up to in September of 1852, trying to figure out how honey bees went about their business:

“We were furnished with little boxes of red, blue, green, yellow, and white paint, in dry powder, and with a stick we sprinkled a little of the red powder on the back of one while he was feeding — gave him a little dab,— and it settled down amid the fuzz of his back and gave him a distinct red jacket.

He went off like most of them toward some hives about three quarters of a mile distant, and we observed by the watch the time of his departure. In just twenty-two minutes red jacket came back, with enough of the powder still on his back to mark him plainly.

He may have gone more than three quarters of a mile. At any rate, he had a head wind to contend with while laden. They fly swiftly and surely to their nests, never resting by the way, and I was surprised—though I had been informed of it—at the distance to which the village bees go for flowers.

The rambler in the most remote woods and pastures little thinks that the bees which are humming so industriously on the rare wild flowers he is plucking for his herbarium, in some out-of-the-way nook, are, like himself, ramblers from the village, perhaps from his own yard, come to get their honey for his hives.” 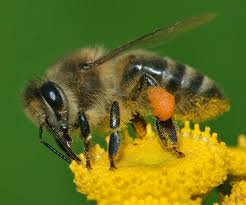 Alas and alack, these are the very bees that human civilization, which Thoreau so distrusted, has endangered under the belief that we can do anything we want to nature without suffering such consequences as the  “colony collapse disorder” now decimating the bees upon which our agricultural depends:  10 million North American bee hives died off between 2007 and 2013 ”from “a combination of agricultural chemicals, diseases, parasites and stress.”

Nonetheless, every time I step out into my modest flower garden on a sunny day there are bees everywhere and of all different sizes,   tiny bees in the tiny flowers, medium sized bees in the medium sized flowers, and bumblebees rummaging around in the hibiscus. Then, being a transcendentalist myself, my ego vanishes into the sunshine and I feel myself, as did Wordsworth, part of “something far more deeply interfused” than my day to day chores.

Although some larger wild bees like the bumble bee are also in distress these days, many smaller wild bees that are native to our countryside seem to be doing quite well, and one of those is the Blue Bee frequenting the blooms of almonds and fruit trees in our national’s orchards.

The United States Department of Agriculture informs us that “In recent years, the blue orchard bee (BOB) has become established as an alternative orchard pollinator in North America. With a strong preference for fruit trees, BOBs are highly efficient pollinators; in fact, just 250-300 females will pollinate an entire acre of apples or cherries.  BOBs forage and pollinate under cloudy skies and at lower temperatures than most other bees.  They are easy to manage and rarely sting.”

Farmers trying to manage Blue Bees quickly learned that they are much more Thoreauvian in their love of autonomy than the more social imported Honey Bees. Here is they are instructed on:modernfarmer.com:

What makes blue orchard bees enticing to farmers, aside from the fact that they’re inherently cool and native to this country, is that they’re actually much more efficient pollinators than honey bees. 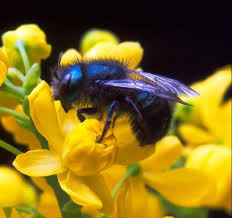 This is partly as a result of their solitary nature and partly a result of the fact that they collect pollen with their abdomens, rather than their legs, which is what honey bees do; BOBs perform this goofy sort of swimming motion within the flower to get pollen to stick to them. This swimming motion is really great for spreading pollen from one plant to another, if not quite as great for actually collecting pollen to give to their broods”

If, like Thoreau, the farmers had painted their Blue Bees red, they would not have observed them returning to village hives but, as he to his beloved Walden, to autonomous little dwellings – holes in the ground, actually – more suitable to their distaste for bee socialization and theirlove of solitude

And so it is that modern farmers have learned to poke Blue Bee larvae into the ground near their orchards or to bury carefully measured little tubes here and there where mother bees can lay their eggs in the solitude they so cherish.