When I was very little, I would wake in the middle of the night convinced that there was a monster under my bed; it was cruel, malicious, and determined to eat me.  I felt entirely defenseless in a world all awhirl with an evil that I sensed, but couldn’t possibly stand up to.

When I was in my teens and began to read about World War II, I thought that Nazi anti-Semitism and American racism where the sources of evil in our times; in my twenties, I began to find  allies in the fight against them. In my thirties, when I realized how deeply sexism was impacting my own economic chances, I became an ardent feminist. Through all this time, whenever I engaged in action with like-minded allies, the actions and the companionship in a common cause raised my hopes for a better world.

Then, this winter, I felt evil under my bed again, bringing those old sensations of terror and helplessness. Like other liberal intellectuals, I  resisted and posted and marched and wrote letters to the editor and tweeted like mad. None of this quelled the sulphurous whiffs the new administration emitted,  so I tackled the inchoate monster by trying to analyze it. 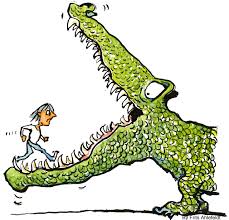 I wanted to understand this evil at its deepest roots – where did it come from? Was it Trump? Was it Bannon? Was it Libertarianism?  I came to the conclusion that these were strategies or means to carry out a policy based on inhumane, malevolent corporate ends.

The result was an article in the European online magazine Impakter on “Trump, and the Problem of Evil.

I was pleased with my conclusion until I realized my liberal friends were filling the social media with such mean-spirited malice that it looked as if a similar malevolence was infecting our own ranks, subverting our progressive ends.

When he interviewed a group of Trump voters as if they are human beings,Nicholas Kristof  found himself subjected to streams of venom:

“Truly the worst of humanity,” snarled one liberal.

“To hell with every one of them.”

“I hate these people. They are stupid and selfish. Screw them. Lose your jobs, go home and die.”

Kristof concludes that “The torrent of venom” shows that “Trump’s craziness is proving infectious, making Democrats crazy with rage that actually impedes a progressive agenda.”

Let us resist Trump’s attacks on our cherished democratic institutions with every ounce of our hearts and minds and strength, but we if we don’t find ways to understand and, yes, dear friends, empathize with the deepest needs of Trump voters we will be all be devoured by the nightmare monster emerging from beneath our beds.