One white person talking with another seems so insignificant amid the vast historic racism in the United States, but I am offering these suggestions with the thought that every little step counts….

When we decided to move to the Detroit Metropolitan Area, one of the most segregated communities in America, we chose a suburb with an excellent high school for our fourteen year old daughter. Our friends were astonished. How could we, who had always fought for civil rights, move to a suburb so racist that the deed to every house forbade Blacks and Jews to live there?

It wasn’t long before I was put to the test.  We were talking over coffee after a tennis game.

“I have to move out of Lathrup Village,” said Betty. “The housing values are going down. You know what I mean!”

What I wanted to do was tell her she ought to know better than to engage in white flight, but  Betty had a temper.

I couldn’t think of any other way to put it, so I kept quiet.

That silence haunted me for weeks. If I didn’t say anything, I was condoning Betty’s racism, wasn’t I?

I called a friend in Lathrup Village.

“I have lived here for fifteen years and love the neighborhood’s diversity,” she replied. “Also, the housing values have gone up 15% in the last two years.”

I called another friend who gives workshops on racial healing.

“Interrupt oppressive speech,” said Mary. “Know your facts. Be sure that you stick to ‘I’ statements. Don’t point your finger at Betty or use ‘you’ phrases like ‘you shouldn’t say that.’”

I practiced a bit. “Let’s see: I would enjoy living in a more diverse community and I have a friend in Lathrup Village whose property values have gone up.”

I went back to the tennis court, but Betty didn’t bring up moving.  But one day, someone mentioned affirmative action.

“My grandparents came from Poland,” Betty declared petulantly. “They worked hard and they made it. I don’t see why Black people can’t do what we did.” 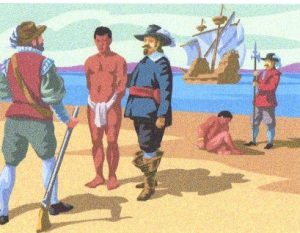 “Those immigrants planned their journeys in advance,” I said.  “They saved up money for their passage. Many of them came as families and had relatives waiting to help them.  African Americans were kidnapped and enslaved, had no money or friends, and were deliberately separated from their tribes when they were sold.”

Betty seemed startled, but she didn’t argue. My friends looked interested, not antagonistic. I felt elated. I had found a way to stand up for my values when prejudiced remarks were made.  I needed to learn facts, work on my temper, and practice making “I” remarks in front of my mirror until I could get a genuinely non-blaming expression onto my face.

Practice makes perfect.  Try this one for yourself:

You have just been to lunch with a white acquaintance. As you walk back to your car, she realizes she has left her pocketbook at the table. You go back to look, but it isn’t there. She declares:

“It would be right where I left it if they hadn’t hired so many black waitresses.”