“What am I going to do about my sister,” a friend of mine complained. “She thinks that God gave us the earth so that we can exploit it.”

“Global warming means absolutely nothing to me,” remarked a neighbor. “By the time it gets really bad, I will be dead and long gone.”

In the face of climate change  environmentally responsible people of the book – Jews, Christians, and Moslems – read the Genesis quote to mean that we should be stewards of our fellow creatures, any power we have over them understood as power for their and our best good. The idea that we are so superior to nature that we can use it any way we wish derives from the enlightenment concept  that “I think, therefore I am” (Descartes), leading to the dangerous idea that having a more developed brain gives us permission to exploit and destroy “lesser beings” upon the earth. This is quite different from the scientific understanding that we do not stand apart from nature but are a part of it, every molecule in our bodies composed of the dust of stars.

Faith traditions around the world oppose human primacy over nature. Anne Rowthorn’s  Song of the Universe anthologizes examples of many such earth-respecting religions.

From the fourth Hindu Veda:

Whatever I dig from you, O Earth

May your mantle grow back again quickly.

O Earth, purifier, may we never injure you.

The world is a sacred vessel

Not to be acted upon.

Whoever acts upon it

“The earth is our mother. What befalls the earth befalls all the children of the earth. All things are connected like the blood that connects us all. We did not weave the web of life, we are merely strands in it.

Whatever we do to the web, we do to ourselves.”

What can we say to our families and friends who don’t care what happens to the environment? It will not help to criticize them. We’ve all met enviro-bullies full of self-righteousness about setting their thermostats lower than we do shaking their greener-than-thou thumbs in our faces for still using plastic; eco-aggression rarely persuades. In fact, it sends people fleeing in the other direction.  It’s really very simple: listen to your friends and relatives, find some common ground around what you both desire for the earth, and present your green ideas as something you believe in and want to share with them, not something they ought to do.

Eco-elitism is particularly annoying for those most impacted by environmental injustice. Van Jones, deploring “Eco-Apartheid” in The Green Collar Economy ,  quotes Sustainable South Bronx activist Majora Carter ‘s feeling that  “’The public image of the environmentalist is all about eating organic food, driving a Prius, and buying solar panels. And that’s incredibly narrow and alienating.”

Environmental activists too often forget that the poor can’t afford solar panels or Priuses, live in urban food deserts where only junk food is accessible, and are subjected to far greater health threats from pollution than the rest of the nation. Jones insists that ” to have everyone participating and benefitting equally-that’s the alternative to eco-apartheid. That’s what we call eco-equity: equal protection and equal opportunity in an economy that respects the earth.” 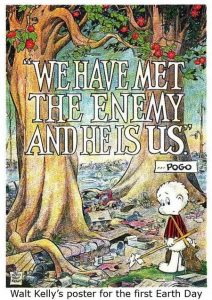 What to do? Read your newspapers to find state and federal legislation that leads to eco-equity; then phone or write your legislators about it.  Don’t go it alone: join a group like the Sierra Club or Citizens’ Climate Lobby that has excellent campaigns already in place.

You can bet that Pogo is going to find a way to share his concerns with his friends and relations in the Bayou – there is no way he can clean up all that of garbage by himself!