I am always interested in the fellow mammals who share our northwest Michigan river property. My frisson at the rare appearances of cougar, bear, and coyote is not quite the same thing, however, as my family feeling about the beaver.

When we first arrived in the early 1990s beaver used to to drag vegetation to their dens for winter storage and lug great long branches to fortify their dam.  But in 1994 they were nowhere to be seen; we asked around and were dismayed to hear that ” the DNA trappers took them out.” 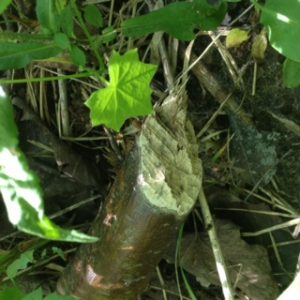 Larger trees had also been felled and then ringed with chew marks, our  friends having survived the winter on the inner bark. We think of evolution as a harsh proceeding – “nature red in tooth and claw” – but it can bring out the best in mammalian intelligence. When I tripped into a beaver den below the river path and realized that a tunnel led into it from the water, I wondered if our beaver, having decided that dams were no longer safe,had adapted their habitat. It also possible that, the dam building beaver having been removed from the Betsie, others already living in the river banks had moved into their territory (They are both the same species). Whichever the case, the beaver made it through to live amongst us once more, either  by common sense or by adaption.

Winter in Michigan is still long, snow covered, and wearying. By February, I find myself thinking about what is going on in those beaver dens:

Beaver, in their turn

in an ecstasy of fur and musk

until their hollow hums…

It is summer again, and yesterday I saw a big adult beaver leaning against a clump of wild iris, a kit playing beside it in the water. The parent’s fur was dry – light brown and fluffy- the yearling’s soaked and sleekly black  The big one was crunching down iris leaves and trying to get the kit to eat some too, but she was having none of it. She played swim behind you, can you find me? She played circle and dive, can you catch me? She played Here I am by raising herself  out of the water as if to obey but then ducking away sideways, evading an impatient cuff. It was the old parent/child conflict of Work vs Play acted out among the rich green fronds of wild iris, the Serious Stuff of Life vs childhood’s Sheer Joy of Perpetual  Motion and Silliness. 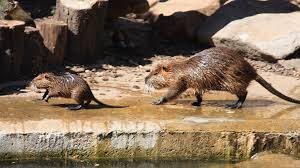