“Filthy Marshlander,” someone yelled, as a chunk of pavement flew through the air. Bethany was relieved when her guard closed in around her.

“Wait until they get their hot knives into you,” shouted a woman with stumps for hands who was nearly naked in her rags.

The beggars fell back. Had the plan failed? Stumbling uphill, Bethany felt terrified.

Then a larger mob surged around them. They poured from the side streets and alleys and wove in and out of the march. Some of them had no legs and scooted along, swinging their torsos between their hands and biting the soldiers’ legs. Bethany remained untouched, but clawing hands and pummeling stumps disconcerted her guards, who were suddenly tangled up in a whole flock of sheep. They flailed away with their swords but made little headway among frantically bleating sheep and fresh attacks from the beggars.

Ram, Bethany worried, where is the ram?  Was she going to miss her only chance of escape?  These sheep were all ewes, none big enough to bear her weight.  Her guards had their backs to her.  She crumpled to the ground and rolled herself into the middle of the melee. Someone grabbed her from behind. She turned to fight, but it was s person on all fours wrapped in a sheep’s pelt.

Bethany confronted the broad shoulders and tossing horns of a very angry sheep indeed. She moved to his side, threw herself on her back, wriggled underneath and with a heave dug her fingers into his fleece and wrapped her legs around him.  Much perturbed, he bucked and flailed, heaving and shuddering to get this wolf off him before it could sink its teeth into his belly.  Then a familiar voice commanded him and he thought it best to obey. Surely his shepherd wouldn’t let a wolf devour him from underneath, would he? 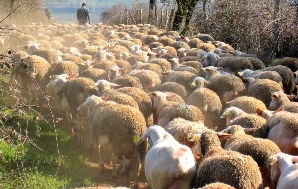 Her mouth was full of stinking fur. The rank smell of sodden pelt and stale sheep urine made her want to retch, but she had to hold on. The ram moved purposively forward. His shepherd must be leading him; this was part of her rescue. Then the ram’s hoofs pounded on wood, she was jerked forward and fell flat on her back into a wagon bed.

This story just “came into my head” one morning when I was wondering how to get my eleven year old hero rescued from her tormenters in The Road to Beaver Mill .  Rescue by sheep provided headlong action and breathless detail — just what I was looking for. It wasn’t until I was proofreading  that I realized the plot twist hadn’t sprung from my own imagination, but derived from my long-ago reading of the Odyssey, when Odysseus rescues himself and his band from the cave of the Cyclops.

Was I plagiarizing? Only if you want to accuse writers through the ages who use narratives that have long been current in their oral tradition. That’s the way stories used to be told, with slight variations on a plot line passed down for generations.

I have written a couple of books on how stories become “archetypal narratives,” with “archetypal” defined as recurrent over a long period of time. The Odyssey, for example, is an archetypal quest narrative where the hero goes on a long journey encountering perils and adventures before he eventually reaches home. I constructed Bethany’s story from the “coming of age” quest,  which goes in the opposite direction. A young hero leaves home to seek maturation through trial and error and perilous adventures.