March hares and moon rabbits are animals  that strike archetypal chords within us, which is exactly why we respond to Miss Piggy.

Our enchantment goes ages and ages back to when our ancestors revered certain animals as avatars of feminine divinity. The goddesses we know as Greek – Aphrodite and Artemis, for example – derive from Middle Eastern religions.  Artemis, Goddess of  wild nature and feminine self-sufficiency, is a later form of Ishtar, Goddess of Heaven and Earth, worshipped in Babylonia as The Light of the World, Righteous Judge, Lawgiver, Goddess of Goddesses, Bestower of Strength – aka, the Almighty MOI.

We know her as the Miss Piggy archetype

Archetypes resonate with traces of their original power. I took the wedding photo above when my granddaughter announced that Miss Piggy was married to my (stuffed) wart hog and that piglet was their baby.  Well well.  How could a nine year old girl know that the Syrian Goddess Astarte mated with a Boar God? No way – it had to be a trace of archetypal memory welling up in her  imagination.

When women encounter a Goddess figure we sometimes experience a profound  psychological  shift, as if she were stirring a latent power within us. 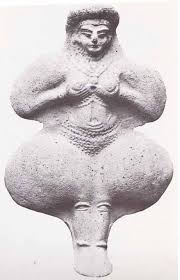 At the University of Wisconsin I  assigned Judith Wright’s  poem about a powerful Ishtar figure completely at home with all of the aspects of her womanhood – menstruation, childbirth, aging; the whole nine yards. Here’s how one of my women students responded:

“I can relate to the poet’s experience with Ishtar simply through identifying with the poet’s feelings. As a young girl, I dreaded developing a woman’s body. I wished for small breasts and hoped I would menstruate as late as possible. But the time I did menstruate I relented to nature and came to feel comfortable in my changing/new body.”

“…when Wright witnesses her power of birth, Ishtar feels calm and satisfied being a woman. I anticipate having children with fear, excitement and other emotions that are difficult to identify. Following the event I can imagine myself as winking at Ishtar.”

I don’t like to think they had anything to do with Milne’s courageous little piglet, but  young boars were ritually sacrificed to Astarte, a practice echoed in the succulent young pigs with apples in their mouths still ceremonially paraded into banquet halls.  Enormous wild boars pop up all over European folklore, instilling fear and respect.

Stay tuned: in the fourth volume of my Infinite Games Series, The Battle of the Black Fen, a particularly ferocious boar attacks my heroes

(and for more about Goddess Archetypes, see