This is a painting by British artist Angela Harding (www.angelaharding.co.uk)  titled “Shooting Stars.”  Notice the moon, and that the Hare is leaping.

Here is a British Hare (European or Lepus europaeus). 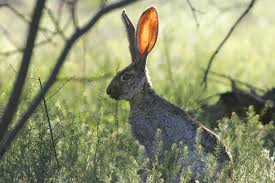 They are said to  “go mad” in March, when, Wikipedia tells us, their “odd behaviour includes boxing at other hares, jumping vertically for seemingly no reason and generally displaying abnormal behaviour.” 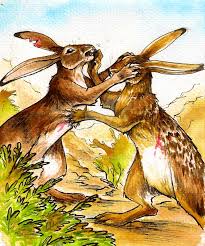 This is the origin of the expression “Mad as a March Hare,” from which “March Madness probably derives.

Guess what? Our backyard bunnies (which here in Michigan are mostly Eastern Cottontails) get up to similar high jinks: Here is a description of their “Mating Dance” by Jean Marie Bauhaus

“Before a litter’s conceived, adult rabbits go through an interesting mating ritual in order to attract and select a mate. A male and a female, also known as a buck and a doe, perform a sort of dance in which the buck chases the doe until she stops, faces the buck and boxes him with her front paws. This goes on until one of the pair leaps straight into the air. The second rabbit also leaps into the air, completing the ritual and signalling that mating can now take place.”

Images of hares and rabbits go way back in human history. When a symbol recurs over a long period of time it is called an archetype, a  motif  of perennial appeal to our human brains. To use a recent word, it is a kind of long term meme. The (Jungian) theory is that archetypes resonate in our psyches because they trigger these inherited memories.

One of these perennial depictions is of a mysteriously compelling rabbit, sometimes leaping wildly and sometimes in a kind of arrested tranquility, frequently with a moon in the sky.

This is the “Moon Hare” archetype which,  Barbara G. Walker tells us, is“sacred to the Goddess Astarte,” and also to the Egyptian Goddess Hathor. This powerful and wise deity is called Eostre in German, that being the northern form of Astarte. “Her sacred month was Eastre-monath, the Moon of Eostre.” Interesting! Walker adds that “recalling the myths of Hathor-Astarte who laid the Golden Egg of the sun, Germans used to say the hare would lay eggs for good children on Easter Eve.”

When I taught courses on archetypes at the University of Wisconsin, my artist students often didn’t realize that the figure they had painted was an archetype. It had just “come to them, they would say.

We are not all artists, but at this time of year we respond to the appeal of rabbits. So if, in these first days of March, you feel a kind of itching in your feet, an urge to dance or an unaccountable larkiness, it may be your way of honoring an inner rabbit, rising within you at the very first signs of the spring.