If you asked me what my favorite bird is, I would probably say the crow — all that intelligence, family loyalty, and sheer brio — but ravens have always fascinated me. At my cabin Up North in Michigan the common or American crow is my daily companion: loud in the morning; flying from tree to tree all day long colloguing in raucous caws;  invisible in their evening fastnesses where they carry on in what I call boudoir crow – a kind of uxorial clicking, like a comb  run over wood 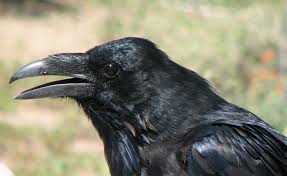 The ravens who live in the tall pines across the Betsie River are a much quieter crew. A whole year can go by until I feel their wings pulse above me with a soaring feel so different from the busy flapping of the crow. They are larger, and have a flatter head and longer beak and tail. Though ravens have a reputation for being noisy, the ones around my place are mysteriously silent, occasionally emitting a hoarse crackling sound to keep in touch with each other.* During the nesting season, I have heard the infantile “maah, maah”  of the young ravens which cry.

The whole flock of crows often descends on an owl or a hawk, cawing and flapping until it abandons its perch. Only once did the ravens join forces with the crows and the blue jays to  harry whatever was stalking a fawn through the forest right next to my cabin: it was a frantic concatenation terminated by the bone-chilling yell of a cougar closing in on its prey .

There are ravens in the world more dreary than mine, like Edgar Allen Poe’s “ghastly, grim” being croaking “Nevermore” ; and there are more cheerful ones, too, like the ones that Buddhist Nun Pema Chodrun describes cavorting near her abbey in Nova Scotia: 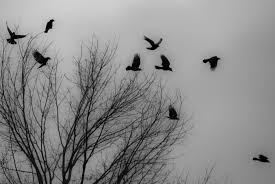 “The wilder the weather is, the more the ravens love it. They have the time of their lives in the winter, when the wind gets much stronger and there’s lots of ice and snow. They challenge the wind. They get up on the tops of the trees and they hold on with their claws and then they grab on with their beaks as well. At some point they just let go into the wind and let it blow them away. Then they play on it, they float on it. After a while, they’ll go back to the tree and start over. It’s a game. Once I saw them in an incredible hurricane-velocity wind, grabbing each other’s feet and dropping then letting go and flying out. It was like a circus act.”

Although their love of play endears them as fellow fun-lovers, what I know about ravens is that they are utterly not us, so different from human beings that our lives are graced by the mere sight of them and by our realization that we share a world more mysterious than we have ever imagined.

*Want to see and hear ravens? go to http://bit.ly/1PUusD4