When you are writing speculative environmental fiction about future worlds (as in the solarpunk and cli-fi genres) you embellish present-day technology with marvelous new features.  When your invented world is based on history, you research and repurpose features of past cultures. Thus the  East Anglian Fen dwellers, in their resistance to the draining of their wetlands between 1630 and 1930, provide the plot and many details for my invented marshland world. Writing my climactic novel, The Battle for the Black Fen,  I came to a place where I needed a whole new culture to borrow from in order to describe the southern alluvial plains and wetlands where my northern Marshlanders undertake a perilous journey.

It was just at that time that I heard about what turned out to be one of the few successes of the Iraq war: the restoration of a small portion of the Mesopotamian wetlands. Threatened by the fierce independence of the Ma’dan, self-sustaining Marsh Arabs who refused to accept his authority, Saddam Hussein drained their entire habitat. In 2013,led by long-exiled Azzam Alwash and under U.S. and allied protection, a portion of the Mesopotamian Wetlands were restored to become Iraq’s first national park. 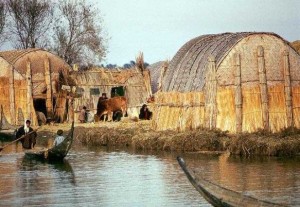 I found two classical books about the Ma’dan, as the Marsh Arabs were called: Gavin Maxwell’s A Reed Shaken By the Wind and Wilfred Thesiger’s, The Marsh Arabs.   Maxwell and Thesinger describe island villages built of reeds inhabited by a marsh dwelling folk every bit as fiercely self-sustaining as the English Fen Tigers.  Their watercraft are entirely unique: they used boats constructed of tightly interwoven reeds, while their children fished and frolicked from floating reed mats plied with  poles.

The Ma’dan culture is rooted in vast marshes between the Tigris and the Euphrates Rivers, the “Fertile Crescent” we are taught was the original “Cradle of Civilization.” As an inventor of ecologically sustainable utopias, here was a true “Garden of Eden” rich with raw material I could use to invent yet another ideal wetland community.

I know, I know – Eden is a utopia we didn’t deserve and we live in a fallen world with plenty of human folly to undermine our yearning for a better one. Like everyone else, Marsh Arabs get into tribal squabbles and visit cruelty upon each other; nor do  all  Ma’dan Sheiks render unfailingly just decisions. Nevertheless, it is precisely because they live in ecological balance allowing them a fierce independence that they earned persecution from a dystopian tyrant, just as the Fen Tigers were persecuted by farmers and merchants precisely because they  insisted upon a self-sustaining existence beyond English rule.

And that is what is at stake in my Battle of the Black Fen, where folk determined to preserve their way of life pit themselves against the concerted forces of early modern capitalism. Now all I need  is an intrepid eco-fiction literary agent!