When a schooner shifts and then tacks into the wind, heeling steeply, how does it feel down below?

“Clare woke up. She had tumbled fully dressed into a bunk the night before and  fallen asleep to a creaking and a swaying that soothed her like a cradle. Now she was pressed against the hull with water chortling along busily  next to her head. There was an empty bunk across from hers with blankets tossed about. It was  tilting, quite alarmingly, above her. The ship halted, shuddered mightily, switched directions, then moved on, leaving her bunk up in the air and the other one below. She clung to the rim, thinking it was a strange way to wake up. . .”   The Marshlanders

Invented worlds, even more fantastic ones than mine, need precise details to make the story convincing. When I set sail with five fifteen year old friends on a voyage from Southern Connecticut to Northern Maine, I never dreamed that, years later, I would find items we recorded in our log useful. 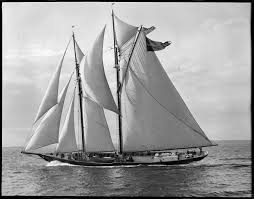 Our schooner had seven sails, just like this one; when not in use, they were stuffed into canvas bags in a small forward hold.  In the 1950s teenagers were expected to act like junior adults, but I hadn’t gotten the message. One night the captain lost his patience and made me sleep alone in the sail hatch. Although I escaped before we set off in the morning, I remember exactly how those canvas bags smelled and felt; I use them in a harrowing scene in The Road to Beaver Mill where a stowaway is thrown about a sail hold with those smelly, heavy bags piling dangerously on top of her.

We went aground several times, damaged our hull on a shoal, had to put in to New Bedford for repairs, and nearly went down in a northeaster.  It was a great relief to turn east at last into Penobscot Bay, one of the loveliest bodies of water in the world.

“The late afternoon sun dappled the bay with a golden fire as the two ships sped, side by side, for home.”

Do you see that little boat trailing behind the schooner in Doug Barber’s photo?  When I shorted our engine by drying my underpants on it, the captain made me stay out in our dinghy all day long.  I had an interesting encounter with a whale, but that’s another story…..