As far as children are concerned, adults belong to another species entirely, possessed with this crazy idea that that children will grow up and become like them. Adults are boring and do boring things; children passionately prefer their own world, the world of play.

Iona Opie, a famous collector of games and pastimes, writes that

“Childhood is a time more full of fears and anxieties that many adults care to remember, and play is a way of escape. A game is a microcosm, more powerful and important than any individual player; yet when it is finished it is finished, and nothing depends on the outcome.”

If you are listening to them from a distance

“you hear a kind of thin screaming noise…Vitality? Yes. But come closer and step into the playground; a kind of defiant light-heartedness envelops you. The children are clowning. They are making fun of life; and if an enquiring adult becomes too serious about words and rules they say, ‘it’s only a game, isn’t it. It’s just for fun. I don’t know what it means. It doesn’t matter.’”

Opie, The People in the Playground.

That’s the way the games in my novel series started – just for fun, so much so that I found myself merrily including more and more of them. I used an ancient “game of toss,” in which you throw a bean bag back and forth to a set pattern of rhymes, as a way for Clare to get food to her mother and her fellow captives. One of the child prisoners knows exactly how it goes, and deftly catches the bag. Children insist on set rules and rigorously enforce them, though they vary from village to village. That is why, when she is lying in a coma after being savagely beaten, Clare’s insistence that only one “choosing rhyme” is the correct one brings her out of it.

Soon, my game dances and pastimes began to embody moods and themes. “Sheep Sheep come home,” played by children lined up like sheep trying to get to their mother through a line of savage wolves, worked to foreshadow approaching danger : 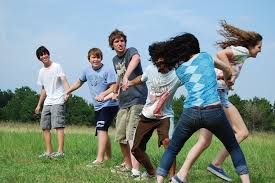 Afraid. What of? The Wolfs.

Won’t be home for seven year

And so it was that my children’s pastimes morphed from leitmotifs to thematic images and symbols of everything that was going on. In the end, their finite games gave way to infinite ones, giving the title to my whole series – but as that doesn’t happen until the Marshlanders and their allies go into battle on the black fen, It is another story, for another time.