Ever since the summer when I was nine years old and my family lived on a boat moored in a New England harbor, I have loved small boats.  We had  great big Elco cruiser, but in order to play with my friends I rowed our little dinghy ashore.  Nowadays I am utterly content to ply a stout little kayak up and down the Betsie, a narrow, winding river in northwest Michigan.

The Marshland children in my novels are “coracled” (a term I invented) at about ten years old, but their little round boats have an ancient history going all the way back to Caesar. They are still used by river and marsh dwellers around the world.  Each one is covered with animal skins or cloth treated with waterproofing before being stretched over the framework. 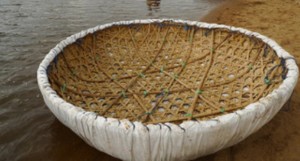 One afternoon during that magical summer when we lived on the boat there was nobody to play with, so I explored the salt marsh, rowing in and out of reeds. Spiders wove intricate webs between frond and frond; eels went about their mysterious business among the underwater grasses; crabs scuttled along the bottom, and blackbirds squawked from far above a green canopy that seemed to enclose me entirely. The sea marsh was bounded by banks of bluish black mud. An entrancing aroma of tidal sludge pervaded everything.

And that was where it all began.

“Say what you will about the lagoon shimmering like a mirror at high tide, I’ll take a nice, redolent mud flat at any time,” remarks Father Robin toward the end of Fly Out of the Darkness.

And off he went, bobbling and scuttling across the lagoon.”